The typical product lifetime of an incandescent light bulb is 1000 hours. When the bulb reaches the end of its product lifetime, it cannot emit light anymore. Typically, just before, there is spark or pop, as the filament inside breaks down.

LEDs use a different meaning for product life. They are the only light sources that over time lose brightness, even up to 90% of initial flux. Eventually, LEDs will also fail completely. However, some emit visible light even after decades.

For example, a Nichia LED with 60,000 hours typical product lifetime will continue to light well beyond the 60,000 hours rated life. Under normal operating conditions, it will even after 200,000 hours.

LED lifetime is the time interval the product can still serve its intended purpose.  The time passed until a LED has 70% of the initial brightness is equal with the product life, L70 lifetime.

For all reputable lighting manufacturers and sellers, LED lifetime is equal with L70 lifetime. At this point, the LED is considered end-of-life and has to be replaced.

1. How to measure LED lifetime?

To solve this problem the industry has created the IES LM80 measuring standard and the IES TM21-2011 Projecting of Long Term Lumen Maintenance of LED Light Sources.

It is carried out over a 6000 to 10,000 hour period, with luminous flux measured at 1000 hour intervals of multiple LEDs of the same type, running at different currents and operating temperatures.

IES TM21 has the purpose of Projecting Long Term Lumen Maintenance of LED Light Sources and consists of a method how to use the LM80 data to predict the lumen maintenance of an LED. Simply put, an exponential curve is drawn between the 1000-hour test points on a graph plotting lumen maintenance from 100% to 70 %.

The condition of TM21 is that the maximum life that may be quoted is six times the actual test duration.

So the LED lifetime according to LM80 and T21 has two parts: actual testing with LM80 and 6x test time projection with TM21. 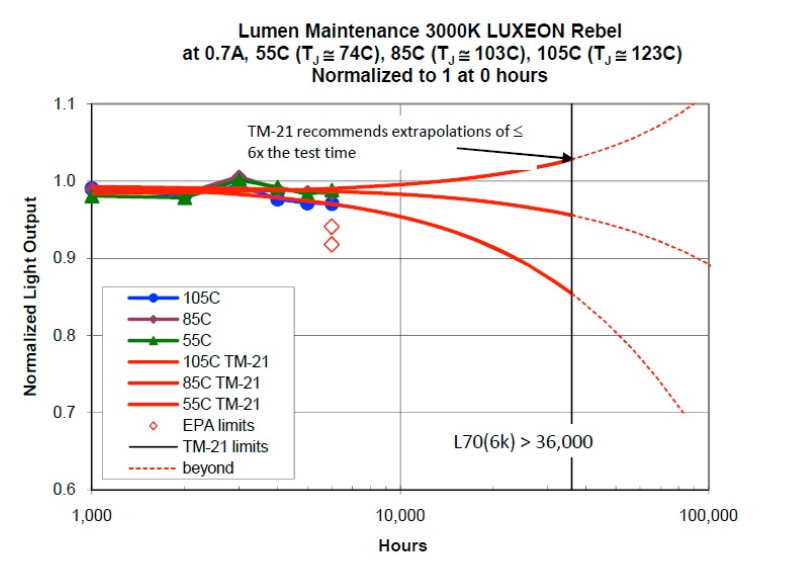 An example of a L80 & TM21 lifetime for Nichia LED test can be downloaded below:

At Lumistrip we use Nichia LEDs for many of our LEDs because of the comprehensive and absolutely trustworthy L80 and TM21 reports. Also, the Nichia LEDs have exceptionally high performance and the longest lifetime on the market.

NEXT →
IP wateproof ratings explained & recommeded levels for the bathroom